Pregnancy: At what age should you get started? 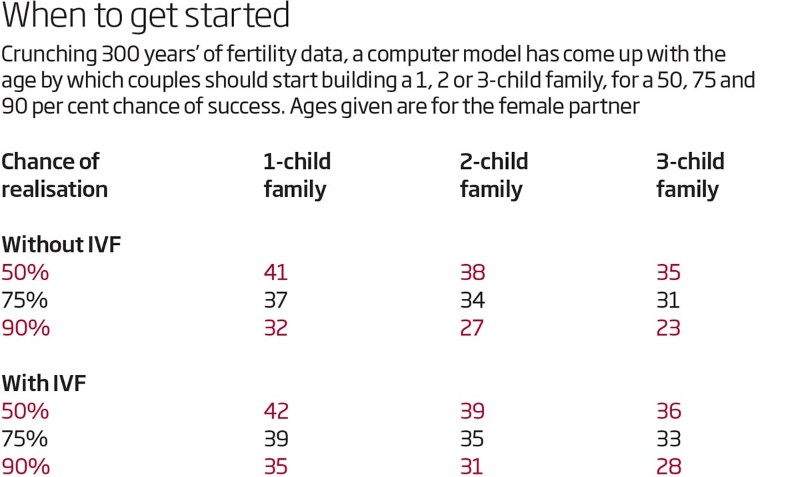 I am often asked by patients what would be the best age to start trying for a family. As most people appreciate, fertility prospects decrease with age. In broad terms there is a slow decline until approximately the age of 35 and then the situation deteriorates reasonably rapidly until the age of 40 at which time there is a precipitous drop. Many people seem to assume, incorrectly, that if they can have one child, the second and third will not be a problem.
In these circumstances I commonly show patients a table which I reproduce below outlined in New Scientist in 2015. The model incorporated data collected over 300 years up to the 1970s involving some 58,000 women. The model also incorporated more recent data on IVF success rates. The model is based on averages so clearly will not apply to every women on an individual basis. IVF does assist the situation although is not a panacea allowing perhaps only a few extra years to conceive.
There are some surprising results. For example pregnancy remains an option for women in their early 40s, with the chance of conceiving about 50%. Some would be shocked that if you want a very high chance, say 90% of having three children, you would need to start at the age of 23.

I have found this a very useful exercise when attempting to assist patients and their partners attempting to navigate this difficult decision.