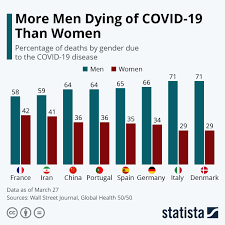 An interesting article from New Scientist

In the current Covid 19 pandemic it has been apparent that this is a disease that particularly hits the elderly harder although it has emerged that there is another risk factor, being male. The first signs of a sex difference in severity emerged in Wuhan after the city entered lockdown. Of those admitted to hospital with serious symptoms, men outnumbered women by more than two to one. There is also been a sex difference among deaths with mortality data revealing that 75% of those who died were men. Larger studies from other countries including England, Wales and New York City backed up these findings.

The difference does not appear to be caused by differential rates of infection. In New York equal numbers of men and women caught the virus but the men were more likely to progress to severe illness and death. Similar findings were noted with two previous coronavirus diseases, SARS and MERS, which also disproportionately affected men. These findings are not reproduced with influenza infections where the ratio is still skewed towards men but only to a small degree.

Multiple possible reasons for this have been proposed although an intriguing possibility may be that women naturally have a stronger immune defence. One key difference is that women have two X chromosomes per cell whereas men only have one. A number of critical immune genes are located on the X chromosome, in particular the gene for a protein called TLR7 which detects single-stranded RNA viruses like the coronavirus. As a result this protein is expressed at twice the dose and many immune cells in females compared with males, and immune response to coronavirus is therefore amplified in females. Usually one X chromosome is inactivated in each female cell although the TLR7 gene somehow seems to escape this in some immune cells, meaning women produce more of the protein. There is also some evidence that female sex hormones such as oestrogen and progesterone boost the immune system.

Clearly if you had a choice, it would be better to be a female when confronted with the prospect of a Covid 19 infection.