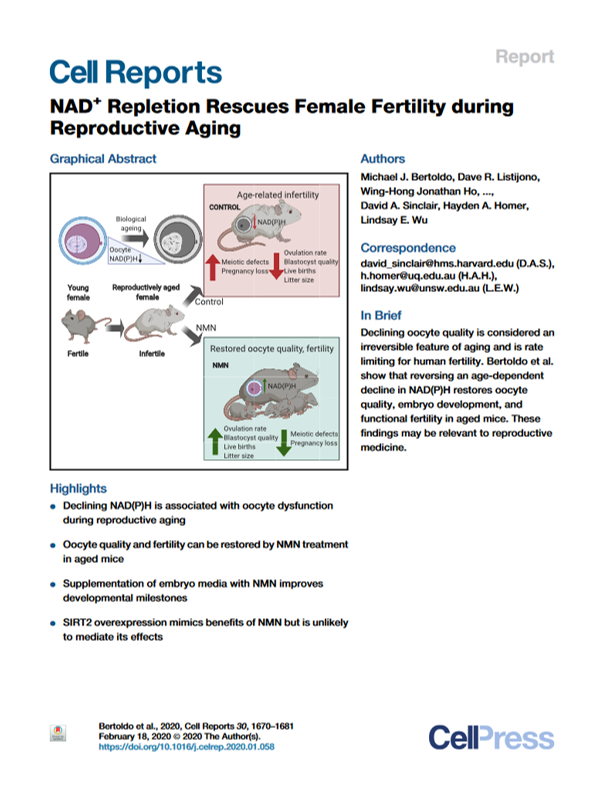 Exciting new research in mice ovaries has revealed that it might be possible to rejuvenate egg quality in human females as they age. It has been known for many years that human egg quality deteriorates from the age of 35 accelerating from the age of 40. This results in falling spontaneous pregnancy rates and increasing miscarriage rates whilst at IVF is associated with poorer quality embryos and fewer embryos available for embryo transfer. Over the years many treatments such as DHEA (dehydroepiandrosterone) and hGH (human growth hormone) have been assessed although the broad mainstream consensus is that they probably don’t work.

Recent work has identified a coenzyme, NAD (Nicotinamide Adenine Dinucleotide or NAD+ denoting the oxidised form of NAD), that is critical for life. Levels of NAD decline as we age and at least in mice, supplementation with NAD or the precursor NMN (Nicotinamide Mononucleotide), results in mice who can run longer and faster and develop biomarkers associated with youthfulness and improved muscle and possibly brain function(Mills et al. 2016). NMN appears to decrease biological age in these mice. There are ongoing studies in relation to humans (Tsubota 2016) although one of the leading researchers, Dr David Sinclair, who recently published the book, Lifespan, is confident that NMN will increase NAD+ levels in humans.

A recent paper has revealed that reversing an age-dependant decline in NAD restores egg quality, embryo development and functional fertility in mice (Bertoldo et al. 2020). If correct and reproducible in humans, these findings have significant implications for fertility and represent a most promising aid to patients struggling to conceive. I intend to discuss these findings with my older patients. NMN is available as a supplement.

Tsubota, K. (2016) The first human clinical study for NMN has started in Japan. Npj Aging and Mechanisms of Disease, 2.