A cautionary tale about adenomyosis, difficult surgical decisions and when to focus on what you have. 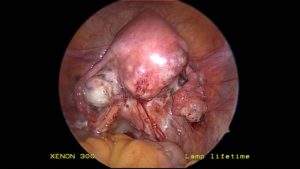 I have recently seen a patient who has been placed in a most unfortunate position. This lady has been in a happy, stable relationship for over 15 years and has been attempting to conceive unsuccessfully for most of that time. Aged 41 when I first met her, she was born with a congenital bowel issue that required major surgery soon after being born. This resulted in all of her large bowel being removed and significant adhesions then developing throughout her abdominal cavity. After going through puberty she began to experience severe menstrual associated pain but she managed to bravely battle through it for years undergoing several major surgeries which unfortunately did not relieve the pain. She was diagnosed with fibroids and an attempt in her 30s to remove them resulted in a diagnosis of adenomyosis rather than fibroids. The adhesions were noted to be severe and it was considered that spontaneous pregnancy would be difficult. Some years went by and in her mid 30s she then attempted surgery to deal with the “fibroids” and the pain. The surgeons told her that unfortunately the risk of bowel damage was high and that the size of her uterus and the issues were such that she may need to consider hysterectomy. She then attempted IVF but the position of her ovaries was such that eggs could not be retrieved. In the interim her blood chemistry and underlying egg reserve revealed that even if she was able to get access to the ovaries the likelihood of obtaining even a small number of eggs was low. She was referred to a surgeon who only considered her fertility prospects and suggested that she  have surgery to deal with the “fibroids”. The potential for complications was discussed with her but it does not appear that the risk was appropriately weighted versus the chance of a successful baby. She duly had the surgery which, as might have been expected, did not go well. The procedure was converted to an open case to deal with the situation. An attempt was made to remove the “fibroids” but much of the problem, being adenomyosis, was left behind. In the days after the procedure it became apparent she had sustained a bowel injury. Repeat surgery with a bag to divert the contents of the bowel was required. She developed a connection between the bowel and the uterine cavity resulting in almost certainly severe adhesions within the uterine cavity (“Ashermann’s Syndrome) such that pregnancy is now almost certainly impossible.  Additionally she developed an abscess in the lung. Now she has a bowel bag, virtually no prospect of getting pregnant, significant pain and discomfort, an increased risk of bowel obstruction and the prospect of repeat surgery and hysterectomy.

Whilst I understand her desire to conceive, I believe the risks were not adequately explained or put into context. As a thought experiment it might be reasonable to put someone in their 20s through a high risk procedure to obtain a pregnancy as the chance of pregnancy is high. It makes no sense to put a woman in her late 40s though a similar procedure as the risk is just that her quality of life is severely impacted for no upside. As unpalatable as it might seem, sometimes if a surgeon indicates it is not reasonable to have an operation or procedure, that might be excellent advice. There is an old surgical quote, “good surgeons know how to operate, better surgeons know when to operate, the best surgeons know when not to operate”.  It can be likened to nature – at times it make no sense to try and stand in the way of a tsunami or a cyclone.